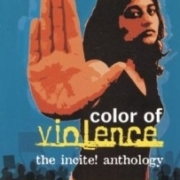 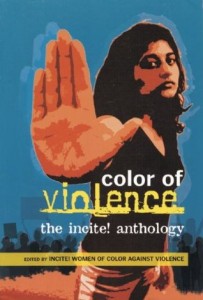 What would it take to end violence against women of color? How does the mainstream antiviolence movement help? How does it hinder? When will we admit that repositioning women of color at the center of the movement–women more often harmed by the police, prisons, and border patrols than aided by them–means that we must address state violence?

In Color of Violence, INCITE! demands that we
• reconsider a reliance on the criminal justice system for solving women’s struggles with domestic violence;
• acknowledge how militarism subjects women to extreme levels of violence perpetrated from within, and without, their communities;
• recognize how the medical establishment inflicts violence–such as involuntary sterilization and inadequate health care–on women of color;
• devise new strategies for cross-cultural dialogue, theorizing, and alliance building;
• and much, much more.

INCITE! Women of Color Against Violence was born in 2000, when more than two thousand dedicated activists from diverse communities came together to end the war being waged on women of color in the US and around the world. Now the largest multiracial, grassroots, feminist organization in the United States, INCITE! boasts chapters in more than 20 cities. Color of Violence: The INCITE! Anthology presents the fierce and vital writing of 32 of these visionaries, who not only shift the focus from domestic violence and sexual assault, but also map innovative strategies of movement building and resistance used by women of color around the world. At a time of heightened state surveillance and repression of people of color, Color of Violence: The INCITE! Anthology is an essential intervention.

A Room of One’s Own / Three Guineas by Virginia Woolf