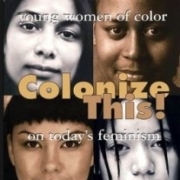 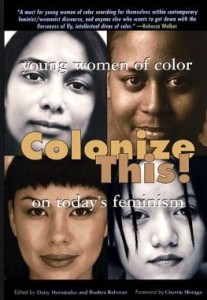 It has been decades since women of color first turned feminism upside down, exposing the ‘70s feminist movement as exclusive, white, and unaware of the concerns and issues of women of color from around the globe. Now a new generation of brilliant, outspoken women of color is speaking to the concerns of a new feminism, and their place in it. Daisy Hernandez of Ms. magazine and poet Bushra Rehman have collected a diverse, lively group of emerging writers who speak to their experience—to the strength and rigidity of community and religion, to borders and divisions, both internal and external—and address issues that take feminism into the twenty-first century. One writer describes herself as a “mixed brown girl, Sri-Lankan and New England mill-town white trash,” and clearly delineates the organizing differences between whites and women of color: “We do not kick ass the way the white girls do, in meetings of NOW or riot grrl. For us, it’s all about family.” A Korean-American woman struggles to create her own identity in a traditional community: “Yam-ja-neh means nice, sweet, compliant. I’ve heard it used many times by my parents’ friends who don’t know shit about me.” An Arab-American feminist deconstructs the “quaint vision” of Middle-Eastern women with which most Americans feel comfortable. This impressive array of first-person accounts adds a much-needed fresh dimension to the ongoing dialogue between race and gender, and gives voice to the women who are creating and shaping the feminism of the future.

The Robber Bride by Margaret Atwood
Scroll to top