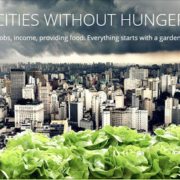 By Denise Nanni and  Milena Rampoldi, ProMosaik. In the following our interview with Jonas Steinfeld of Cities without Hunger, Cidades sem Fome, a Brazilian humanitarian organization struggling against poverty in megacities like Sao Paulo. Would like to thank Jonas for his important impulses.

Tell us about the history of your organisation Cities without Hunger.
CITIES WITHOUT HUNGER was founded in 2004 by the Brazilian Hans Dieter Temp. By the time, he was living in the periphery of the megacity Sao Paulo where unemployment and food insecurity still prevail. Temp realized that many plots of land in the rapidly growing metropolis were used as illegal garbage dumps or invaded. His idea was to transform these areas into food producing community gardens, where locals could take care of their own plot and plant and harvest food for their own consumption as well as to sell it to the community. Temp started to gather friends and neighbors and started the first community garden next to his house. Encouraged by the success of this first organic vegetable garden, he started the Community Gardens Project. The municipality of Sao Paulo supported the project in the first months. After an election, however, support dried out and Temp went on to found the NGO CITIES WITHOUT HUNGER in 2004 to be able to continue the project. Ever since, the NGO has sustained itself with public as well as private funds and has become the most successful urban farming organization in Brazil.
What is a community garden?
A community garden in our Community Gardens Project is an urban farm, located mostly in the peripheries of big cities where access to organic food and employment is low. Here, plots of unused land are transformed into organic vegetable gardens and people from the local community are trained in horticulture and commercialization of their produce. The gardens vary in size, from under 500m² to more than 8.000m² and usually sustain several families with each taking care of its own plot. The NGO CITIES WITHOUT HUNGER trains the locals, prepares the land for vegetable crop production, supplies the farmers with organic fertilizers and seedlings and helps them market their produce. All profits go directly to the farmers and the NGO finances its activities by donations.
How do you reach the people that could benefit from your initiatives?
CITIES WITHOUT HUNGER’s approach to people is focused very much on local communities. The NGO’s team is in constant search for plots of lands in poor communities that could be transformed into productive urban gardens. After having appeared in several big national TV shows, the NGO receives countless requests every week to get active in different communities. CITIES WITHOUT HUNGER selects these communities carefully on the basis of severity of poverty, living standards and access to healthy food, amongst other criteria. Once a new area is defined, local associations, neighbor groups, churches and schools are contacted to reach out to a maximum number of locals.
What has the impact of your garden projects been so far?
CITIES WITHOUT HUNGER has already created 25 community gardens, where 115 people have become urban farmers. They are able to supply their families with healthy organic food and make a living by selling the excess production. This way some 650 people benefit from the project directly. Furthermore, hundreds of locals have gained access to fresh organic vegetables in their own community.
The NGO has also started a second project, the School Gardens Project. In this project, the NGO focuses on public schools that are underfunded and cannot provide their students with environmental education and healthy food. The gardens built by CITIES WITHOUT HUNGER are used to produce food for the schools’ canteen and as an open class room where students learn about nature, how to plant your own food and the importance of vegetables in the daily diet. 38 of these school gardens have already been built and there are many more to come. Up until now, the project reached 14.506 children.
Do you cooperate with local authorities and institutions? If yes, how?
Yes, cooperation with local authorities and institutions is very important for the projects. Many times, the plots of land used for creating community gardens are owned by the municipality or other public entities. Legal agreements and contracts are always the first step before the CITIES WITHOUT HUNGER team starts to prepare the land for farming.
In the School Gardens Project, partnerships with public schools are crucial. Many school principals contact the NGO in order to start such a partnership and demand is always higher than the available funds to do so. Unfortunately, funding by the government and municipalities is extremely low, which is why the NGO has to get finance from other sources in order to start the school and community gardens. Apart from funding, however, cooperation with local authorities and institutions is excellent and the CITIES WITHOUT HUNGER’s efforts are increasingly welcomed and appreciated among public officials.
Hopefully, the answers give you an idea about our projects in Brazil. I have been working there for 2 years and I can honestly say, that the communities involved in the projects really appreciate the opportunities to become organic farmers right next to their home in the favelas. People start buying much more vegetables and integrate them in their daily diets, where the majority are used to consume only processed food. They also learn about the true value of the land under their feet and what you can do with it. This NGO truly deserves more attention.
https://promosaik.org/wp-content/uploads/2017/05/1142.jpg 272 640 promosaik https://promosaik.org/wp-content/uploads/2020/02/Promosaik_brandwordmark.png promosaik2017-05-13 12:28:302017-05-13 12:28:30Cities without Hunger – an interview about how to struggle against megacity poverty

Center for Food Safety – for the protection of human health

Tamara Martsenyuk – our interview about women in Ukraine
Scroll to top