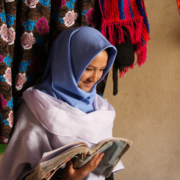 by Milena Rampoldi and Denise Nanni, ProMosaik. In the following our interview with Christina Safiya Tobias-Nahi, director of public affairs at Islamic Relief USA. We talked to her about Islamic strategies to cope with poverty, in particular if it concerns children and women, the most vulnerable components of Muslim societies. Islamic Relief works all over the world. Would like to thank Christina for her time and for her photos. Christina also explained the multi-dimensional concept of poverty in Islam, directly connected to the Islamic concept of social justice.
According to your experience, what are the most effective ways to address poverty?
In Islam, poverty is defined by five groups of activities and things which make up the human needs:  religion, physical self, intellect or knowledge, offspring and family, and wealth. The fulfilment of these needs is considered one of the basic goals of Islam.
The Islamic perspective correlates with the broad consensus of poverty being a multi-dimensional issue, as it is based on human needs that cannot be reflected in monetary terms alone.  In particular, in as far as operational measurement is concerned; the last four types of basic activities that make up basic human needs in Islam are similar to the indicators in the Human Development Indices developed by the United Nations, which stress the importance of income, education, and health.
We also try to address the root causes of poverty such as doing advocacy around issues such as international debt and usury and by encouraging microfinance; or around issues of climate and conflict that keep people vulnerable, leading to or keeping them in conditions of poverty.
Do you think that  prejudices and social stigma have a negative effect on the reintegration of people who expeience poverty?

Yes, we do, so we have 5 values we work from including a core one around social justice. Also dignity is a principle underpinning in our mission so we also serve our beneficiaries without prejudice and indeed try to uplift them.  If you are familiar with our national US Days of Dignity events, we outreach to homeless populations and in addition to giving them hot meals and blankets and medical health screening etc, we also provide services like haircuts so as to hopefully reduce for them social stigma they may be facing in their community on a daily basis.
Is society responsive to your initiativse and do you try to involve local communities into supporting people in need?
We partner with communities of other faith or secular groups in carrying out our work with those who share our broad mission of supporting people in poverty. 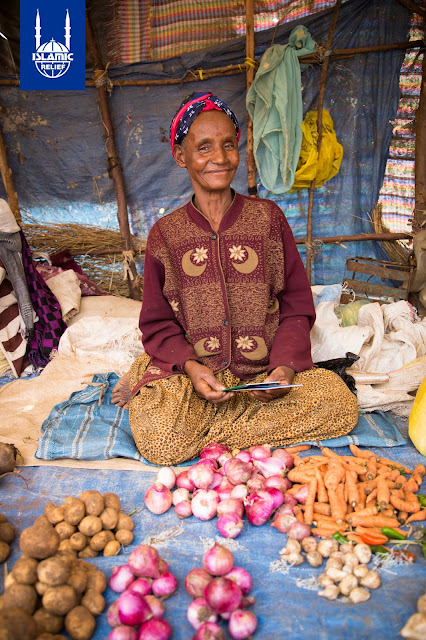 Women and children are  more vulnerable to poverty. Do you carry on any specific project in order to empower them?
Women often suffer especially harsh conditions in impoverished communities. According to the World Health Organization, 800 women die every day from complications arising from pregnancy and childbirth, 99% of them in developing countries. Women have lower literacy rates than men in many countries, and often, when a child must leave school to perform work such as carrying water, girls are chosen to make this sacrifice. Improving the condition of women benefits not only women themselves but also their societies.
“[Women’s literacy] improves livelihoods, leads to better child and maternal health, and favors girls’ access to education. In short, newly literate women have a positive ripple effect on all development indicators,” reports Irina Bokova, director-general of UNESCO, in the 2010 development report.
Islamic Relief dedicates an increasing number of resources to improving education and health for women and girls. Recent programs have included education and income generation. In the United States, Islamic Relief supports several programs—including a women’s shelter—that empower survivors of domestic abuse.
We are very cognizant of the special vulnerabilities women and children may and do face. Many of our international programs target them specifically such as for microfinance and livelihoods training. We also do a similar program in the US such as in Virginia where we ran a sewing program for newly arrived immigrant head of household mothers that Huffington Post featured.
Moreover we recently held an event called For Women by Women https://www.eventbrite.com/e/for-women-by-women-luncheon-presented-by-irusa-at-cherry-blossom-tickets-28907353673#
that featured many of our programs that help women from training female nurses and medical personnel to treat women in their communities to livestock and farming training for widows and others.  For children we have a robust orphan program and also just opened last month the Nelson Mandela Children’s Hospital oncology unit in South Africa with IRUSA one of the major sponsors. Finally, we also have research on gender justice, early marriage, and other issues specific to women and girls you might find of interest either out or coming out in early 2017.
Do you think that institutions and policy makers could do more in order to prevent this issue? If yes, how?
The IR family offices have a growing advocacy commitment because of the sincere desire as above not just to respond to needs of the most vulnerable but to advocate for systematic change to create safety nets and also opportunities to uplift communities out of poverty. In the US, UK, German, Sweden and a few other countries we are actively meeting with government and policy makers on a wide range of issues and will continue to do so as many of these countries have just had or will soon have elections and we have to educate new lawmakers and government entities. 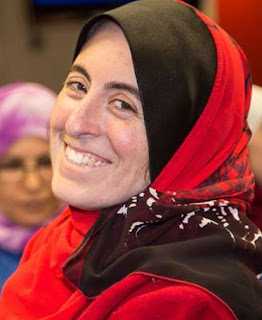 CHRISTINA TOBIAS-NAHI
Director of Public Affairs
Christina Tobias-Nahi has been the at the helm of Public Affairs at Islamic Relief USA since 2006. She took a three year sabbatical in 2011 leading International Programs at the Joint Council on International Children’s Services with a portfolio on orphan care and orphan nutrition; she also managed the program TechGirls, a summer program of the US State Department and Legacy International to bring emerging female leaders from the Middle East and North Africa to DC for leadership training. In 2014, she returned to Islamic Relief USA as Director of Public Affairs. In 2016, she was a part of an interfaith inter-agency team trip to Jordan, Lebanon and Turkey looking at the refugee situation and child protection issues. Christina holds a post graduate certificate in Community-based Development and an M.A. in International Relations from Boston University-Paris where she spent two years working in Paris for the OECD. After that, she obtained an Ed.M. from the Harvard Graduate School of Education and worked at Harvard for nearly a decade with the Islamic Legal Studies Program and the Civil Rights Project. She has published several book chapters on education issues faced by Muslim immigrant children living in the US and is also a member of the INEE, the InterAgency Network on Education in Emergencies and has attended their global consultations.
https://promosaik.org/wp-content/uploads/2017/02/11112.jpg 426 640 promosaik https://promosaik.org/wp-content/uploads/2020/02/Promosaik_brandwordmark.png promosaik2017-02-26 12:36:332017-02-26 12:36:33Christina Safiya Tobias-Nahi of IRUSA