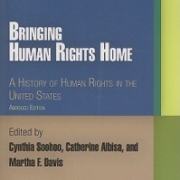 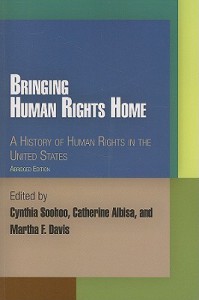 Throughout its history, America’s policies have alternatively embraced human rights, regarded them with ambivalence, or rejected them out of hand. The essays in Bringing Human Rights Home: A History of Human Rights in the United States put these shifting political winds into a larger historical perspective, from the country’s very beginnings to the present day.

The contributing writers examine the global influences on early American attitudes toward human rights and, reviewing the twentieth century, note the high-water mark of human rights acceptance during Franklin Delano Roosevelt’s presidency. They examine the domestic tensions between civil and political rights on the one hand, and economic, social, and cultural rights on the other. Taking the long view, many of the contributors emphasize the role played by social movements and grassroots activists in pressing a human rights agenda from the bottom up.

The essays examine the centrality of human rights in the early and mid-twentieth-century civil rights movement, the breadth of subnational human rights activism in the face of federal inaction on a range of human rights issues, and the ways both post-9/11 developments and government responses to the devastation of Hurricane Katrina spurred grassroots activism in the United States. Several essays explore in depth the emergence of new advocacy strategies, both in the context of litigating for civil and political rights and through the lens of particular economic rights sectors, such as labor. Though the setbacks for human rights have been many, Bringing Human Rights Homedemonstrates the strength and resilience of the U.S. human rights movement and offers hope for its future.