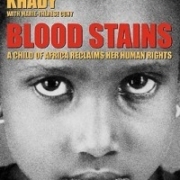 Blood Stains, a best-seller in France, is a Diaspora memoir about growingup in a traditional family in Senegal and emigration to Paris. Its feisty protagonist, Khady, suffers genital mutilation at age seven, a brutal rite that entails lifelong distress, sexual trauma and harrowing childbirths. Married off at thirteen to a man two decades older, the teenager bears five children, and, as a battered wife, blows the whistle on an immigrant community that serves men’s interests. Not content to remain a victim, however, the young woman fights for education, earns an independent living and becomes an activist. Her courageous battle against FGM as founder and president of the European Network brings her to the U.N. to urge international support.

The Nazi Doctors and the Nuremberg Code: Human Rights in Human Experimentation...