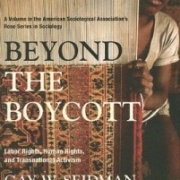 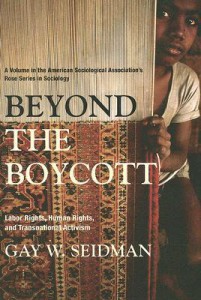 As the world economy becomes increasingly integrated, companies can shift production to wherever wages are lowest and unions weakest. How can workers defend their rights in an era of mobile capital? With national governments forced to compete for foreign investment by rolling back legal protections for workers, fair trade advocates are enlisting consumers to put market pressure on companies to treat their workers fairly. In Beyond the Boycott, sociologist Gay Seidman asks whether this non-governmental approach can reverse the “race to the bottom” in global labor standards.

Beyond the Boycott examines three campaigns in which activists successfully used the threat of a consumer boycott to pressure companies to accept voluntary codes of conduct and independent monitoring of  work sites. The voluntary Sullivan Code required American corporations operating in apartheid-era South Africa to improve treatment of their workers;  in India, the Rugmark inspection team provides ‘social labels’ for  handknotted carpets made without child labor; and in Guatemala,  COVERCO monitors conditions in factories producing clothing under contract for major American brands. Seidman compares these cases to explore the ingredients of successful campaigns, as well as the inherent limitations facing voluntary monitoring schemes. Despite activists’ emphasis on educating individual consumers to support ethical companies, Seidman finds that, in practice, they have been most successful when they mobilized institutions—such as universities, churches, and shareholder organizations. Moreover, although activists tend to dismiss states’ capabilities, all three cases involved governmental threats of trade sanctions against companies and countries with poor labor records. Finally, Seidman  points to an intractable difficulty of independent workplace monitoring: since consumers rarely distinguish between monitoring schemes and labels, companies can hand pick monitoring organizations, selecting those with the lowest standards for working conditions and the least aggressive inspections. Transnational consumer movements can increase the bargaining power of the global workforce, Seidman argues, but they cannot replace national governments or local campaigns to expand the meaning of citizenship.

As trade and capital move across borders in growing volume and with greater speed, civil society and human rights movements are also becoming more global. Highly original and thought-provoking, Beyond the Boycott vividly depicts the contemporary movement to humanize globalization—its present and its possible future.

The Mobilization of Shame: A World View of Human Rights by Robert F. Drinan