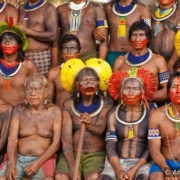 By Denise Nanni and Milena Rampoldi, ProMosaik. In the following our interview wih Amazon Watch, an important organization working at the interface between human rights and environment. We would like to thank Moira for her important information bout her organization and her strategies and aims. 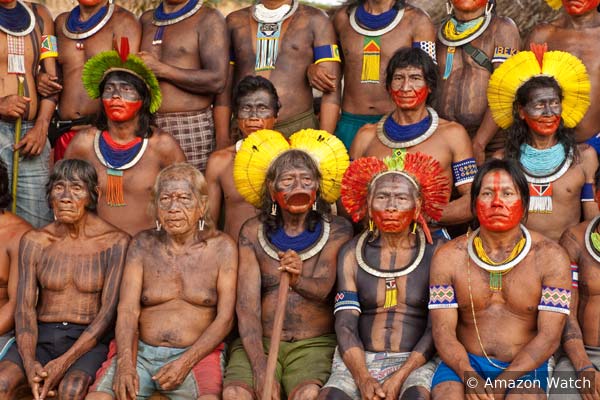 How was Amazon Watch founded?
Amazon Watch is a nonprofit organization founded in 1996 to protect the rainforest and advance the rights of indigenous peoples in the Amazon Basin. We partner with indigenous and environmental organizations in campaigns for human rights, corporate accountability and the preservation of the Amazon’s ecological systems.

What are the main threats to the Amazon Forest and its people?

1. The rollback of indigenous rights, especially land rights.
The Amazon rainforest is home to nearly 400 distinct indigenous groups. These peoples depend on the Amazon rainforest for their physical and cultural survival, and have been its steward for millennia. Indigenous territories (claimed or titled) comprise more than a quarter of the Amazon basin. Unfortunately, most rainforest areas currently under threat from unsustainable mega-projects fall within the traditional homelands of indigenous peoples. Yet, despite their vital role in the region, Amazonian indigenous organizations have been largely marginalized from decision-making on economic activities and natural resource management. Leading researchers now acknowledge that involving indigenous peoples in land management and recognizing their land rights provides one of the most effective strategies for stopping deforestation.
2. Dirty Energy Projects
Dirty energy projects drive deforestation, pollution and rights violations in the Amazon basin. Over the decades, national governments and corporations have erected dozens of oil and gas projects and hydroelectric dams across the region with no meaningful safeguards for the fragile rainforest ecosystem or the wellbeing of the local peoples.  Oil and gas projects have resulted in the loss of millions of acres of forest as pipelines and oil roads have opened the way to uncontrolled logging, ranching and colonization. These same projects have also left a tide of pollution from spills and systematic dumping of toxic production waters. Massive hydroelectric dams have flooded vast forest areas, altered the natural flow and health of entire river systems, and devastated the fish stocks and other aquatic life local peoples depend on for their daily sustenance.
3. Lack of corporate accountability
All too often, multi-national corporations operating in the Amazon basin cause significant environmental destruction – widespread deforestation and pollution in particular – while also violating the rights of the local people. Amazon Watch works to bring these corporations to account for the harms they have caused while also protecting the rights of those threatened by future projects. Time and again, corporations have polluted the region in efforts to lower production costs while maximizing return for shareholders. As corporate revenues grow, the true costs of these actions can be seen in the sick and dying communities and devastated environment left behind.
4. Financing from International Financial Institutions for harmful projects
Mega-projects – such as dams, road and waterway systems, and oil and gas projects – are major drivers of deforestation in the Amazon Basin. These large-scale projects require large-scale funding, and international financial institutions (IFIs) step into to fill that role. For decades, the World Bank, the Inter-American Development Bank (IDB) or an export credit agencies such as the U.S. Export Import Bank were the principle players in backing big projects in South America. Recently however, regional actors including Brazil’s National Bank for Economic and Social Development (BNDES) and the Andean Development Corporation (CAF) are playing an increasing role in funding mega-infrastructure projects. With billions of dollars in loans going to environmentally devastating projects, the growing investments by regional banks is especially alarming given their lack of transparency and accountability, and weak enforcement of environmental and social safeguards.
5. Climate Change
A healthy Amazon rainforest is one of the Earth’s best defenses against climate change. The world’s tropical forests, of which the Amazon is the largest, currently absorb some 20 percent of the carbon dioxide produced from burning fossil fuels. Protecting the Amazon rainforest – which when cut or burned actually contributes to climate change – must be a centerpiece of the global efforts to stop climate change, along with transitioning to clean energy. 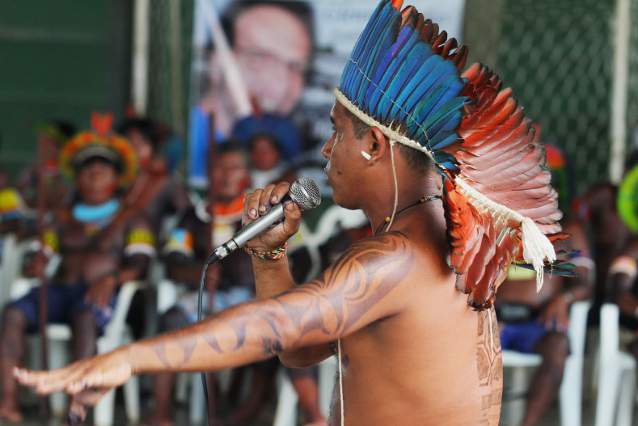 How important are civil society strenght and usage of media in your area of activity?
Extremely important.

In the Amazon region of Brazil, Colombia, Ecuador, and Peru, Amazon Watch is working directly with indigenous communities to build local capacity and advance the long-term protection of their lands. In partnership with communities, non-governmental organizations, concerned shareholders and citizens, we utilize the following strategies:

·         Campaign to persuade decision-makers in corporations, international financial institutions and governments to honor the rights of indigenous peoples over “development” decisions in their territories and to rectify past harms, for example in areas devastated by oil drilling. Through media exposure, legal action and shareholder campaigns we demand social and environmental accountability.
·         Strengthen capacity of indigenous communities and partner organizations in the Amazon to better advocate for their own rights at local, national and international forums. Through training in legal skills, advocacy, media and technology as well as the donation of equipment, we help our indigenous partners assert their collective voice and advance their own vision for their territories.
·         Seek permanent protection for threatened areas and vulnerable indigenous populations in the Amazon rainforest. In partnership with ally organizations in South America, we champion ecologically sound alternatives and solutions to industrial and fossil-fuel intensive economic “development.”
·         Educate corporate executives, shareholders, public officials and the general public using media coverage, websites, publications and documentary films. By building awareness and promoting green economic alternatives to the current export-oriented development model, we are helping to bring about a shift within key institutions and society.
Do the national and international legal suffice to demand for corporate accountabilty? If not, what can be improved by policy makers?
No.  Corporations are rarely held to account for the misdeeds, and are often closely allied with policy makers in doing so. The case of Chevron in Ecuador is illustrative.
While drilling in the Ecuadorian Amazon from 1964 to 1990, Texaco – which merged with Chevron in 2001 – deliberately dumped more than 18 billion gallons of toxic wastewater, spilled roughly 17 million gallons of crude oil, and left hazardous waste in hundreds of open pits dug out of the forest floor. To save money, Texaco chose to use environmental practices that were obsolete, did not meet industry standards, and were illegal in Ecuador and the United States.
The result was, and continues to be, one of the worst environmental disasters on the planet. Contamination of soil, groundwater, and surface streams has caused local indigenous and campesino people to suffer a wave of mouth, stomach and uterine cancer, birth defects, and spontaneous miscarriages. Chevron has never cleaned up the mess it inherited, and its oil wastes continue to poison the rainforest ecosystem.
Today, Chevron is a corporate criminal on the run. It has been found guilty by Ecuadorian courts and ordered to pay $9.5 billion. The company is now running from an international legal dragnet to force the company to pay for the vast task of cleanup and remediation of the Ecuadorian Amazon jungle. The Ecuadorians have filed lawsuits in Canada and Brazil to seek seizure of Chevron’s assets for this purpose, and more lawsuits in other nations are expected soon.
Amazon Watch works with the affected communities in the case to monitor the trial and protect the judicial process, keep the ongoing fight for justice in the spotlight, and help coordinate international pressure for Chevron to do the right thing in Ecuador. The company has engaged in repeated attempts to subvert the rule of law in Ecuador, ranging from the use of deceptive sampling techniques in scientific studies of the contamination, to lobbying efforts in Washington, to dirty tricks campaigns to contrive a phony corruption scandal and smear the presiding judge. We have successfully worked with shareholders, consumers, environmentalists, indigenous rights supporters, and other concerned people to expose these efforts and keep the heat on Chevron to clean up its toxic legacy in Ecuador. However, we need continuing support to ensure that 30,000 Ecuadorian indigenous and campesino peoples get their day in court to demand accountability from one of the world’s largest corporations.
Do you cooperate with local authorities and institutions? If yes, how?
We use direct engagement and pressure campaigns to engage with local authorities and institutions. We do not receive any kind of funding or other such support from any government entity or corporation.