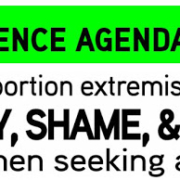 by Denise Nanni and Milena Rampoldi, ProMosaik.  In the following our interview with All Above All, a coaltion led by women of color and young people, struggling for reproductive rights, and reproductive justice. Abortion should be a private decision. Would like to thank Destiny Lopez (Co-Director of All Above All) for her important information and impulses.

How was founded All Above All?
All* Above All is a powerful coalition led by young women and women of color who are mobilizing to ensure that every woman, however much money she makes, is able to make important decisions in life, such as whether to become a parent. We were started by women of color and reproductive justice leaders who came together in 2011 to prioritize the goal of ending the Hyde Amendment.
Why, according to you, moral has still a strong effect when it comes to abortion rights?
We know that abortion is an issue that brings up strong feelings for many people, and we may not all agree. What’s most important, however, is that each woman is able to make her own decisions about abortion, without politicians interfering.
What are the factors that can lead to a lack of access to reproductive rights in the States?
While 44 years ago, Roe v. Wade made abortion legal in this country, the truth is that many women have continued to be denied meaningful access to abortion care. For example, for decades, low-income women have been denied abortion coverage by the Hyde Amendment. Now, Donald Trump and his anti-woman allies in Congress want to pass even more restrictions that bully, shame, and punish women who need abortion care. These restrictions hit hardest those communities that are already facing too many barriers to care, including women of color, young people, immigrants, and low-income people.
What activities do you carry on in order to promote reproductive rights?
All* Above All embraces multiple strategies to achieve our goals: we are re-introducing proactive federal legislation, the EACH Woman Act, which lifts bans that deny abortion coverage; we are working with partners in 20 states to protect and expand access; and we are changing the conversation about abortion in this country.
Do you think is important to involve men in this debate? Why?
Ending the harmful legacy of the Hyde Amendment is something that we can all support – and All* Above All is proud to work with diverse supporters. While we are led by women of color and young people, we recognize that men can be important partners in this work. We also include abortion coverage for trans men as part of our vision for reproductive justice.
We are sending a clear message to Donald Trump, Mike Pence and the anti-choice Congress: We will be BOLD, we won’t be punished, and we aren’t going anywhere.