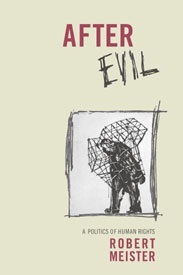 The way in which mainstream human rights discourse speaks of such evils as the Holocaust, slavery, or apartheid puts them solidly in the past. Its elaborate techniques of “transitional” justice encourage future generations to move forward by creating a false assumption of closure, enabling those who are guilty to elude responsibility. This approach to history, common to late-twentieth-century humanitarianism, doesn’t presuppose that evil ends when justice begins. Rather, it assumes that a time before justice is the moment to put evil in the past.

Merging examples from literature and history, Robert Meister confronts the problem of closure and the resolution of historical injustice. He boldly challenges the empty moral logic of “never again” or the theoretical reduction of evil to a cycle of violence and counterviolence, broken only once evil is remembered for what it was. Meister criticizes such methods for their deferral of justice and susceptibility to exploitation and elaborates the flawed moral logic of “never again” in relation to Auschwitz and its evolution into a twenty-first-century doctrine of the Responsibility to Protect.

Inhuman Conditions: On Cosmopolitanism and Human Rights by Pheng Cheah
Scroll to top