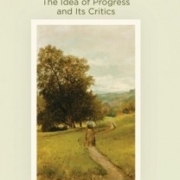 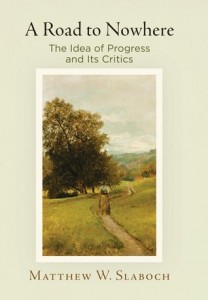 Since the Enlightenment, the idea of progress has spanned right- and left-wing politics, secular and spiritual philosophy, and most every school of art or culture. The belief that humans are capable of making lasting improvements–intellectual, scientific, material, moral, and cultural–continues to be a commonplace of our age. However, events of the preceding century, including but not limited to two world wars, conflicts in Korea and Vietnam, the spread of communism across Eastern Europe and parts of Asia, violent nationalism in the Balkans, and genocides in Cambodia and Rwanda, have called into question this faith in the continued advancement of humankind.

In A Road to Nowhere, Matthew W. Slaboch argues that political theorists should entertain the possibility that long-term, continued progress may be more fiction than reality. He examines the work of German philosophers Arthur Schopenhauer and Oswald Spengler, Russian novelists Leo Tolstoy and Aleksandr Solzhenitsyn, and American historians Henry Adams and Christopher Lasch–rare skeptics of the idea of progress who have much to engage political theory, a field dominated by historical optimists. Looking at the figures of Schopenhauer, Tolstoy, and Adams, Slaboch considers the ways in which they defined progress and their reasons for doubting that their cultures, or the world, were progressing. He compares Germany, Russia, and the United States to illustrate how these nineteenth-century critics of the idea of progress contributed to or helped forestall the emergence of forms of government that came to be associated with each country: fascism, communism, and democratic capitalism, respectively.

Turning to Spengler, Solzhenitsyn, and Lasch, Slaboch explores the contemporary relevance of the critique of progress and the arguments for and against political engagement in the face of uncertain improvement, one-way inevitable decline, or unending cycles of advancement and decay. A Road to Nowhereconcludes that these notable naysayers were not mere defeatists and presents their varied prescriptions for individual and social action.

It Was All a Dream: A New Generation Confronts the Broken Promise to Black America...

Black Klansman: Race, Hate, and the Undercover Investigation of a Lifetime by...
Scroll to top