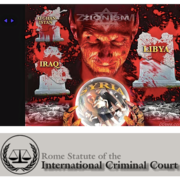 The ICC Gives Stamp Of Approval For Crimes

Committed With Arrogant Impunity By Israel 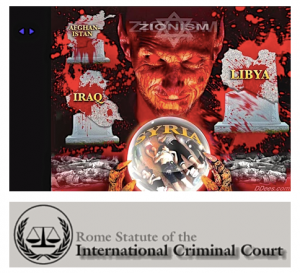 The States Parties to this Statute,

Conscious that all peoples are united by common bonds, their cultures pieced together in a shared heritage, and concerned that this delicate mosaic may be shattered at any time,

Mindful that during this century millions of children, women and men have been victims of unimaginable atrocities that deeply shock the conscience of humanity,

Recognizing that such grave crimes threaten the peace, security and well-being of the world,

Affirming that the most serious crimes of concern to the international community as a whole must not go unpunished and that their effective prosecution must be ensured by taking measures at the national level and by enhancing international cooperation,

Determined to put an end to impunity for the perpetrators of these crimes and thus to contribute to the prevention of such crimes,

Recalling that it is the duty of every State to exercise its criminal jurisdiction over those responsible for international crimes,

Emphasizing in this connection that nothing in this Statute shall be taken as authorizing any State Party to intervene in an armed conflict or in the internal affairs of any State,

Determined to these ends and for the sake of present and future generations, to establish an independent permanent International Criminal Court in relationship with the United Nations system, with jurisdiction over the most serious crimes of concern to the international community as a whole,

Emphasizing that the International Criminal Court established under this Statute shall be complementary to national criminal jurisdictions,

Resolved to guarantee lasting respect for and the enforcement of international justice,

Have agreed as follows: http://legal.un.org/icc/statute/romefra.htm

The ICC has just confirmed — by acknowledging that while Israel may have committed war crimes when commandos stormed an aid ship in 2010 killing nine people, the offences, however, were “not serious enough” to warrant prosecution — that It is far easier to be courageous, forthright, and high-principled on paper that it is in reality. So once again dark, grey clouds bearing the threat of accusations of “anti-Semitism” have hovered over, rained down upon, and extinguished the barely flickering flame of universal justice. The socially ingrained and sustained fear of being accused of “anti-Semitism” is therefore still Zionist Israel’s ultimate weapon for silencing criticism of, and avoiding accountability for crimes against humanity. The ICC’s continued chicken-hearted failure to carry out its remit was highlighted by an opportune Amnesty International report on Israel’s recent barbaric Operation Protective Edge:

“Israeli officials have failed to give any justification for carrying out these attacks. In some of the cases in this report Amnesty International has not been able to identify any possible military target . . . In those cases it appears that the attacks directly and deliberately targeted civilians or civilian objects . . . displaying callous indifference to the carnage caused . . . which would constitute war crimes.”

Undeterred by any kind of conscience, human decency or self-respect, Israelis — assisted by a shameful universal lack of coordinated condemnation or determined demands for criminal indictments — continue to deprive the Palestinian people of their human rights; continue to ignore with contempt all international law; and continue to deliberately undermine and violate peace efforts and agreements including the recently negotiated “ceasefire” in Gaza. While the mostly muzzled mainstream media might provide occasional redacted reports of newsworthy atrocities, they invariably avoid reporting the daily ongoing barbarous persecution of Palestinians because — apart from fearing a vindictive backlash from pro-Israeli lobby groups — they also know that such reports would be of little interest to audiences, listeners, and readers who have been immunised by the regularity of Israel’s barbarity against any feelings of indignation or outrage.

Despite its 2005 “Disengagement Plan,” Israel, rather than end its occupation of the Gaza Strip, has instead simply transformed its 1967 physical military occupation of the territory into an occupation by siege that enables it to exercise continued brutal control over the Gaza Strip and its inhabitants. Even the recent “ceasefire” following Israeli-war-crime-documented Operation Protective Edge has as usual proved meaningless with Israel  maintaining its relentless ongoing policy of making life for the Palestinians totally unbearable as is obvious from the numerous incidents reported by the Palestine Monitoring Group:

So what chance does humanity have so long as religious/political leaders and institutions are allowed to betray the responsibility with which they have been entrusted — namely that of ensuring inalienable human rights and justice for all without exception? What chance does humanity have so long as those who are profiting from continual military conflicts are allowed to use their purchased political influence and control to determine the course of human events? What chance does humanity have so long the mainstream media continues to avoid truthful journalism unless it is either of no consequence or happens to coincide with the interests of powerful corporations? What chance is there so long as the mainstream media continues with its pernicious programming of people as happened following the tragic events of the 9/11 terrorist attacks when the media fomented such outrageous fear, paranoia and anger that the brainwashed American people willingly surrendered their freedoms by allowing Congress to pass the Patriot Act and create the Department of Homeland Security that led to the NSA spying on all Americans with the recording of their phone calls, webcam videos, mobile device texts and financial transactions without warrants and in contravention of the law.

In the face of such overwhelming odds, those who endeavour to achieve democracy, freedom, and justice, can consequently on occasion become somewhat disheartened — a sentiment recently expressed by Allan Hart (http://en.wikipedia.org/wiki/Alan_Hart_(writer)) in his article “Is a Peaceful Resolution of the Israel-Palestine Conflict REALLY Possible?”

“I’ll begin my answer by saying that for some weeks I have been suppressing in my mind the conclusion that Palestine is a lost cause and that there is no point in me continuing to devote a great deal of time (as I have done for three decades) to writing books and articles which expose Zionism’s version of history – the version upon which the first and still existing draft of Western history is constructed – for the propaganda nonsense it mainly is. In other words I was close to concluding that I should close my Palestine file . . . Of course I would like my pessimism about Obama doing what is right and best for all parties (and the whole world) to be proved by events to have been without foundation, but if events do not provide the proof I will take my conclusion that Palestine is a lost cause off hold and close my Palestine file, in order to do something more useful with what is left of my life.”

Those of us who are familiar with Mr. Hart’s forthright and honest journalism regarding the appalling plight of Palestinian people, can only hope that he will overcome feelings of doubt and continue with his sterling work because as Eric Willoughby of the Palestine Media Digest recently reminded me, we must not give up.

Freedom and democracy are dreams you never give up.

William Hanna is a freelance writer with a recently published book the Hiramic Brotherhood of the Third Temple. Sample chapter, other articles, and contact details at: (http://www.hiramicbrotherhood.com/)