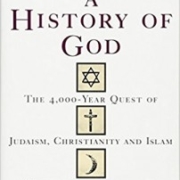 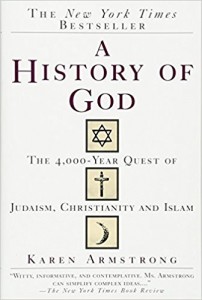 Superb kaleidoscopic history of religion, from an English nun- turned-scholar. Armstrong (Holy War, 1991, etc.) was a nun in the early 1960’s but left her convent in 1969 as part of the great wave that defected from religious life at that time. Although her faith grew progressively weaker, her fascination with religion didn’t abate, and, even as a nonbeliever, she continues to pursue theological studies. Here, her basic message is that “religion is highly pragmatic. We shall see that it is far more important for a particular idea of God to work than for it to be logically or scientifically sound.” In an extraordinary survey, Armstrong traces the development of Judaism, Christianity, and Islam from their inception to the present day, and shows how they were created and shaped by their historical surroundings–which, in turn, they helped form and alter. Although this approach is standard among religious scholars, Armstrong uses it to particular advantage in underscoring the historical correspondences among the three faiths- -for example, examining the messianic fervor that surrounded the career of the Sabbatai Zevi (the 12th-century rabbi who built up an enormous apocalyptic cult among diaspora Jews prior to his imprisonment and conversion to Islam) in light of the early Christian response to the crucifixion of Jesus or of Jeremiah’s prophecies about the destruction of Jerusalem. It’s particularly in the mystical traditions, according to Armstrong, that the different faiths corroborate each other–in large part, she says, because the mystical apprehension of the divine is more abstract and therefore less dependent upon the traditional symbols by which most religions distinguish themselves. There are major gaps in Armstrong’s history–she pays little attention to the Christian churches of the 20th century–but she manages against the odds to provide an account that’s thorough, intelligent, and highly readable. Magisterial and brilliant.

Harvest of Empire: A History of Latinos in America by Juan Gonzalez

Devil Take the Hindmost: A History of Financial Speculation by Edward Chanc...
Scroll to top