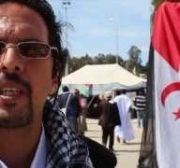 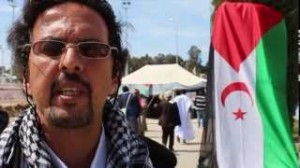 By Milena Rampoldi, ProMosaik. In the following an important interview with the Saharawi journalist and political activist Malainin Lakhal. We talked about his biography, his fight for the Western Sahara, about Moroccan colonialism, and about the importance of poetry and political struggle for the forgotten Saharawi people living in the last colony in Africa.
Tell us the most important steps of your life-fight for the Western Sahara.
Like most of Saharawi youth in my generation I lived the first days of the Moroccan occupation and oppression in Western Sahara, and I had to adapt to it, to learn how to fight against it instead of submitting to this colonial will.
I studied in Moroccan colonial schools, but I succeeded to keep my identity and escape all Moroccan attempts to brainwash me, as they did with their own people. The Moroccan regime came to Western Sahara with a whole policy of colonization. It didn’t only target resisting militants, killing them, imprisoning them and torturing them, these colonial policies targeted the normal citizens, even those Saharawis who were less engaged politically. And of course, children and students were the main targets of a complete educational policy that aimed at isolating a whole generation from its history, culture and of course from any possible political tendencies in favor of freedom. But, as all colonial powers, these very policies also trigger suspicion and resistance among us, the youth. We succeeded to identify the Moroccan propaganda and lies, and we succeeded in exposing them with very simple means. This is in general the environment where I grew up. An environment of colonization, oppression but also resistance with dignity.
Like thousands Saharawis, I was victim also to forced disappearance, imprisonment, torture and ill-treatment. Just the exact treatment that all colonized people suffered from to create a resisting generation. I was active as a student in the Saharawi secret movement since the late eighties, then I was active as a member in the movement of unemployed graduates in the mid-nineties, to opt finally for a more direct and open resistance against the occupied starting from 1997. My weapons were raising awareness, writing and demonstrating peaceful, organizing demonstrations and recruiting militants to join the movement. IN 2000 I had to flee my occupied territory and join the Saharawi refugee camps because the Moroccan police persecution was getting too dangerous for my safety and physical integrity. IN the camps I engaged in a career of journalism and I also served as member in various Saharawi civil society organizations especially AFAPREDESA (Human rights), Saharawi Journalists and Writers Union (UPES), Saharawi Trade Union (UGTSARIO) and Saharawi Natural Resources Observatory, among others. I am still fighting for the freedom of my country, using my pen and my voice to draw attention to the cause. I write in various national and international Medias outlets. 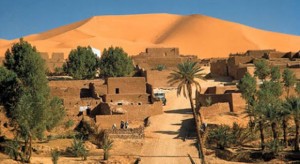 Why is it so important to talk about the Western Sahara around the world?
It is not only important! It is a matter of life and death for the whole international legal and political system. The conflict in Western Sahara is the last case of decolonization in Africa where the colonial power, Morocco, backed by the old colonial power, France, is trying to deny a whole nation its basic and fundamental right to self-determination. This is a case of violation against the international law. It is a case of attempt to impose the expansion of the Moroccan territory to include another territory by force. It is a case of denial of the most fundamental rights of freedom, expression, movement, cultural rights and economic rights. It is a case where a colonizer is simply denying a colonized people all their rights and still get away with it because France and maybe few other governments believe that peoples’ and human rights do not matter, what matters for them are their interest and their ability to exploit the natural resources of a colonized nation in total impunity. And these governments, by the way, are the same ones that lecture about human rights and pretend to defend them everywhere. Unbelievable hypocrisy.
Why is Moroccan colonialism still there? What are the main reasons?
The main reasons of the persistence of the Moroccan occupation are political, economic and geographical. Morocco needs to have an international or regional conflict to divert the attention of its people from their real problems, which are no more than the regime and its spears. Another reason is economic. Morocco gains billions of dollars every year from the occupation. One only need to follow the hundreds of cargos that transport yearly stolen phosphate from the occupied zones to have a sort of idea about the scale of the plunder. A good example is the Cargo detained by the South African justice since the beginning of May in Port Elizabeth. It is a 45000 tons worth about 4 to 5 million dollars. Imagine how many million dollars Morocco is getting from more than 100 hundred Cargo that were tracked back in 2008 for example by the Western Sahara Resource Watch. Every year hundreds of ships leave the ports of Western Sahara full of Phosphate, Fish, Sand, and lately we also found that the Moroccans are also extracting Gold from the occupied zones and trafficking it to the Golf countries.
Then comes also the geographical, and geostrategic reasons that makes Morocco willing to sacrifice everything to maintain the occupation. Morocco is a small country in terms of geography, especially that more than 50 to 60% of its territory is made useless because of mountains and arid regions. It doesn’t have any significant natural resources and it has more than 30 million mouths to feed. So, the expansion of the territory in Western Sahara will provide the Kingdom with 268.000 Km square, rich in minerals, and inhabited by a small nation that doesn’t reach one million people. It will give Morocco also 1400 km coast rich in fisheries, and a desert where all renewable energy can be generated, because of its strong sun, wind and strong waves in the coast. On the geostrategic level, Morocco is serving the plans and strategies of the West, especially France, and this later cannot afford allowing Algeria to be the regional power. Algeria is huge in terms of geography, unlike Morocco, and unlike Morocco it is also very rich in resources. So it has the needed ingredients to be a super power in Africa. This is something that France will never allow to happen. These are some of the reasons, there are many others I already mentioned in a previous interview published in AfricaSpeaks4Africa.org (http://africaspeaks4africa.org/world-needs-know-western-saharas-seemingly-endless-struggle-independence/) an Ethiopian-American website. 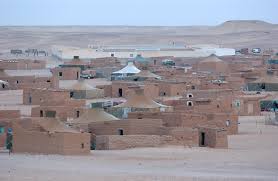 Tell us about the most important human rights violations of Morocco against Saharawi people?
The main violation is of course the violation of the right of all peoples to self-determination. The second is the expansion of its territory by the use of force. Then comes a range of civil, political, cultural, and economic rights. All these violation are well documented by all international organizations that you can imagine, Amnesty, HRW, Frontline, and Robert Kennedy Foundation to mention only these in addition to many reports by UN Special rapporteurs, especially the Rapporteur on torture. But, have you ever heard any sort of denunciation or condemnation by the UN to Morocco? Never. I begin to believe that mentioning all these violations and trying to unveil them is just a waste of time because the so-called international community is absent and cares more about the reality-show programs on TVs than about the real life and sufferings of the peoples everywhere because of the criminal policies of regimes such as the Moroccan.
ProMosaik thinks that political poetry can send an important message of solidarity for the Saharawi people. What do you think about it?
I am a poet myself; at least I used to be because it has been a long time since I had the desire to write poetry about my feelings. It is emotionally very heavy to write poetry especially when the audience of poetry is getting smaller and smaller everywhere, including in my country that is otherwise famous with its traditional poets who were able to move the population better than any politician can.
Yet, I agree that poetry can be a good means to convey the story, the message and the feelings that Western Sahara as a nation, people and individuals hold. I also know that there is a huge heritage of political poetry in the Saharawi refugee camps produced by few iconic poets that merit to be exposed to a wider audience.
What have you reached until now with your writings and what is your dream for the future?
I opened the eyes of thousands of students, young women and men, students and researchers whom I met once, or who read some of my writings. I gave hundreds of lectures in various countries around the world giving the opportunity to many people to know what the real problem is and what is really at stake in this conflict. Because many people will think or say that the struggle in Western Sahara doesn’t concern them, while they are totally wrong. This conflict concerns any person anywhere in the world who care about his or her own freedoms and liberties.  The grabbing of the territory of Western Sahara is a test by Morocco and the powers behind it. If it succeeds any other strong nation can grab any other weak one, and impose its colonial fait accompli just like Morocco is willing to do. It will be a precedent, and none can complain about colonization in the future. This is how I conceive it. And it is funny that these days, another Arab country, Qatar, is starting to suffer a slightly similar bullying from its neighbors. I say to the Qataris who supported Morocco before: Welcome to our world!

ACF Uganda – We see corruption as a major spoiler of development